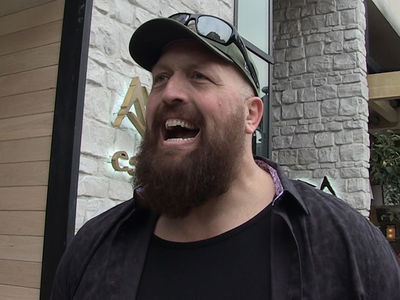 WWE superstar Big Show has been destroying people in the ring for 24 years -- but tells TMZ Sports he ain't slowin' down any time soon!! At 46 years old, Big Show -- real name Paul Wight-- is still going hard ... but people are wondering how much longer he can handle the wear and tear of the job with his 7'0", 400-pound frame. The good news for wrestling fans -- dude ain't ready to tap out just yet. "I signed a new deal last year," Big Show told us at Avra in Beverly Hills ... "I gotta couple of years left. I'm having fun."Show ain't impervious to injury -- he's still recovering from a tweaked hamstring -- but, overall,the guy is in great shape, feels good and wants to keep going. We also spoke with Show about his long-rumored showdown with Shaquille O'Neal-- and if the two will EVER square off. Plus, Show tells us why Charlotte Flair might be the biggest BEAST in all of pro wrestling. Good stuff from a genuine living legend.