Conor McGregor to Dodge Jail and Deportation in Plea Deal 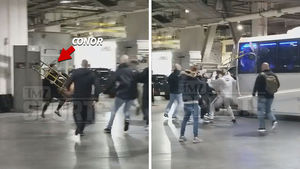 Conor McGregor is one lucky scofflaw ... because TMZ Sports has learned he's on the verge of striking a deal in his New York City criminal case that will keep him in the U.S. and out of jail.

We've learned Conor's lawyer is in the final stages of negotiating a plea deal in his felony mischief case ... the case that was filed after the UFC champ unleashed his fury by hurling a dolly into a UFC bus, injuring 3 fighters. His target was UFC rival Khabib Nurmagomedov, who was not hurt.

Conorwas charged with one count of felony criminal mischief and 3 counts of misdemeanor assault.

Sources familiar with the deal tell us, prosecutors have agreed to reduce the felony to a misdemeanor. That's hugely significant because a felony involving violence could trigger permanent deportation from the U.S.

As 2021 began, the price of safe assets like Bitcoins in the crypto world, and gold in traditional...…