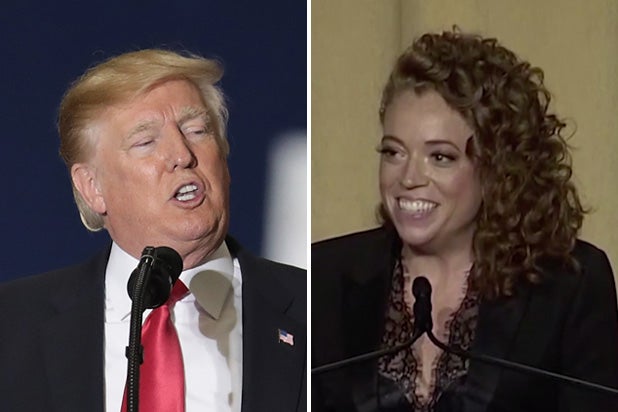 President Donald Trump may have skipped Saturday night’s White House Correspondents Dinner — but that didn’t stop him from panning the annual gathering of journalists as a “big, boring bust.”

POTUS, who led a campaign-style rally in Washington, Mich., on Saturday night, also slagged show host and “Daily Show” alum Michelle Wolf in a Sunday-morning tweet as a “so-called comedian” who “really ‘bombed.'”

While Washington, Michigan, was a big success, Washington, D.C., just didn’t work. Everyone is talking about the fact that the White House Correspondents Dinner was a very big, boring bust…the so-called comedian really “bombed.” @greggutfeld should host next year! @PeteHegseth

Wolf, the host of an upcoming weekly Netflix series, skewered both the media and the Trump administration in her 20-minute routine, even ripping into White House Press Secretary Sarah Huckabee Sanders — who was sitting on the dais just feet away.

“I have to admit I’m a little starstruck,” Wolf said in her remarks. “Sarah, I love you as Aunt Lydia in ‘The Handmaid’s Tale.'”

She didn’t stop there. “Every time Sarah steps up to the podium, I get excited, because I’m not really sure what we’re gonna get,” she said. “You know, a press briefing, a bunch of lies, or divided into softball teams.”

At another point, she said of Sanders, “What’s ‘Uncle Tom’ but for white women who disappoint other white women?”

For the second straight year, Trump skipped the annual event, a charitable dinner to celebrate journalists and the First Amendment that most presidents have attended in the last few decades.

Wolf also needled members of the media in the room. “You guys love breaking news, and you did it, you broke it,” she said of CNN. “The most useful information on CNN is when Anthony Bourdain tells me where to eat noodles.”