Correctfella06, Mar 20180 Comments
President Muhammadu Buhari has disclosed that the victims of herdsmen killings in Benue and Zamfara states are not to be compared to that of the Mambilla Plateau and Taraba State which have claimed more lives. 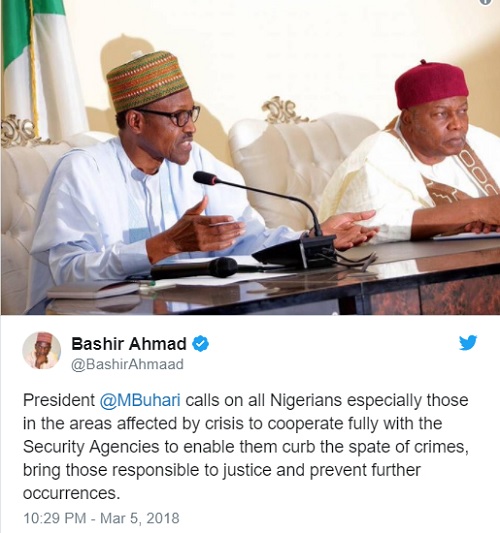 While speaking during a stakeholders’ meeting with representatives of ethnic groups and the Taraba State Governmentat the Taraba Government House in Jalingo, President Buhari on Monday, said the crisis on the Mambilla Plateau in Taraba State had claimed more lives than that of the herdsmen killings in Benue and Zamfara states.

According to PUNCH, the President arrived at the Danbaba Suntai Airport about 3.38pm accompanied by the Ministers of Women Affairs, Defence, Information and Culture, some members of the National Assembly from the state and Service Chiefs. He was received by the state Governor, Darius Ishaku.

It was gathered that in the high profile meeting which lasted for almost two hours, Buhari called on the traditional rulers to find ways of resolving the crisis in the state.

He said;“Governor Darius Ishaku and I are here temporarily. We will go at the end of our tenure, but you are permanent with the people at the grass roots.

“So, I charge you to go back and find ways of resolving the crises in your domains. Go and give your people justice for peace to reign.

“When I was campaigning, I came here and promised to provide security, boost the economy and fight corruption.

“Today, even our worst enemy can attest to the fact that the APC-led Federal Government has done well in the area of security. We have decimated Boko Haram, while the fight against corruption is going on well.

“I can only appeal to the conscience of the people for them to embrace peace and live with one another in harmony so that there could be development and not destruction.

“As a President, I have sources of getting intelligence on happening across the country and so I should not be expected to always go out to the field to make noise and insult the sensibility of Nigerians before it would be known that I am taking actions against the killings.

The President who was in the state to condole with the people and government of Taraba State over the killings in the state, called on the people to tolerate one another, live in peace with one another, as well as the arrest and prosecution of any herdsman caught with arms.