Home/Sports
06, Feb 2018 0 Comments 72324 Views
Chelsea are keeping tabs on Real Madrid star midfielder, Marco Asensio, but Madrid will be keen on getting Eden Hazard if they will let go of Asensio who has scored eight goals in all competition this season. 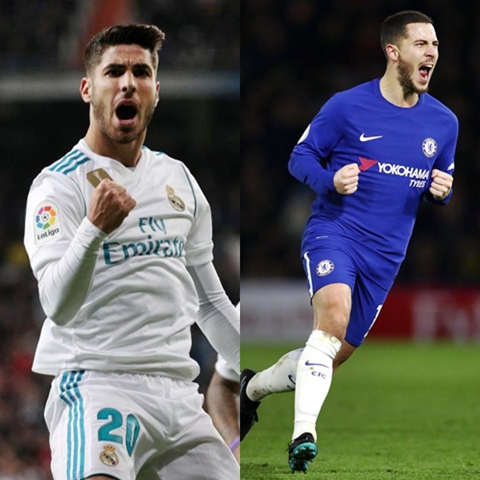 English Premier League Champions, Chelsea FC are keeping tabs on Real Madrid youngster, Marco Asensio, but any transfer would likely hinge on Eden Hazard moving in the opposite direction, according to a report by The Sun.

Spanish news outlet, Diario Gol claim the Blues have been interested in 22-year-old Asensio, for months, as the Spain midfielder was tipped to thrive this season but has only started nine La Liga games.

Asensio, who has scored eight goals in all competitions this season, plays mostly as a left-winger but can operate through the centre as well.

Real are preparing a sensational £120million summer move for 27-year-old Belgium superstar Hazard, whose Chelsea contract runs out in 2020 and he is yet to sign a new deal.

His dad, Thierry had told a Belgian newspaper that Eden is waiting to hear if Madrid want him."Eden has refused a contract extension to able, if necessary, to follow interest from Real Madrid,"Thierry said.

The Spanish report claims Chelsea have sounded Real out about a possible transfer for Asensio with speculation of Hazard's future heating up.

The Blues swooped for Morata in the summer after a season playing second fiddle to Karim Benzema at the Bernabeu. But Asensio insists his situation is not the same and he is happy with his role in Zinedine Zidane's squad.

In November, he said:"Morata's case is very different [than mine]. When he returned to Madrid, he wanted to be more important."I am 21, just starting out in this. I always want to take advantage of the playing time I get from the coach, whether 15 or 20 minutes, or when starting, so that I can be counted on for important games in future."