Home/others
19, Jan 2018 0 Comments 61541 Views
A baby who was apparently abandoned by its mother, has reportedly died inside a dumpsite in a community in Port Harcourt. 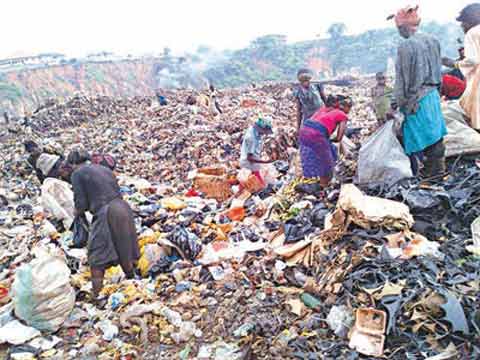 Obviously outraged, many people were seen cursing and swearing on whoever would have abandoned a baby on a dumpsite at Ikoku Junction, Port Harcourt City Local Government Area of Rivers State, yesterday, a report by Vanguard had shown.
Residents of the area said they woke up yesterday morning to see the baby, wrapped in a white cloth, abandoned in the middle of a refuse dump in front of St. Thomas Anglican Church, Mile 2, Diobu.
Some of the onlookers, who spoke to Vanguard, expressed sadness with the attitude of the person that abandoned the baby. One of them, a lady, who identified herself simply as Charity, noted that the baby was dropped by the unknown person at midnight.
She added that the baby was showing signs of life in the early hours of the day, but regretted that it died when no help came.
The remains of the baby were still at the wastes site at press time, even as the Rivers State Police Command said it is not aware of the development.
Meanwhile, in Nasarawa State, the Medical Director of Federal Medical Centre, FMC, Keffi, Joshua Ndom, has said the hospital is handling three cases suspected to be Lassa Fever.
He said in Keffi, yesterday, that the hospital had taken the patients’ blood samples for test to ascertain whether or not they had the disease.
According to Ndom, “the patients have been separated from other patients. There are three suspected cases and we have taken adequate measures to tackle the situation, because the health of the people is our concern.

“I want to use this medium to appeal to patients and members of the public not to panic, but to remain calm. Necessary steps have been taken to avert the spread of the virus in case there is any.”
He also restated the Centre’s commitment to good policies and projects that have direct bearing on the lives of Nigerians.
Lassa Fever is transmitted through broken skin via direct or indirect contact with the feaces or urine of infected rat.
It can also be contracted through the consumption of contaminated rat.