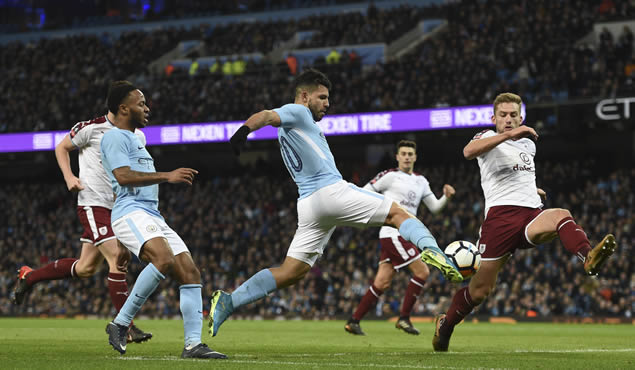 Sergio Aguero scored a quick fire brace in the second half as Manchester City maintained their interest in four trophies by beating Burnley 4-1 in the FA Cup third round at the Etihad Stadium on Saturday.

The Argentine striker helped rescue the tie for Pep Guardiola’s team after they trailed to Ashley Barnes’s first-half opener for their Premier League rivals.

But the equaliser, in the 56th minute, was not without controversy as Ilkay Gundogan’s quickly taken free-kick caught Burnley unprepared and played Aguero clean in on goal for City’s all-time leading scorer to complete a routine finish.

That led to a furious reaction from Burnley players, who clearly felt the free-kick had been taken too quickly and Guardiola and his opposite number Sean Dyche became embroiled in an angry argument with the fourth official and each other.

That row was still ongoing when Aguero claimed a brilliant second, playing a pass to Gundogan, who back-heeled the ball cleverly back to the forward, who again gave Nick Pope no chance with an unstoppable shot.

Leroy Sane ensured City would have a comfortable passage into the fourth round after 70 minutes with another well-worked goal.

The German played another devastating one-two with David Silva, running through to receive the return pass before finishing impressively from a wide angle.

And, with eight minutes to go, Pope rushed from his area to try and beat Sane to a Kevin De Bruyne through ball, allowing the winger to round him and square for substitute Bernardo Silva to score into an open goal.

It was a harsh scoreline on the visitors, who had already threatened by the time Barnes fired them into a 25th-minute lead.

It was the most direct goal imaginable as Sam Vokes rose to flick on a long punt forward from goalkeeper Pope.

There was ample opportunity for John Stones to clear the danger but the England defender completely miskicked his attempted clearance, allowing Barnes to sprint through on goal and beat Claudio Bravo with an accomplished finish from15 yards.

City could not say they had not been warned, with the best chance of the game having already fallen to the visitors from Johann Berg Gudmundsson’s 18th-minute corner, which former City junior Ben Mee headed powerfully across an empty six-yard area.

But prior to the opening goal, City had enjoyed the bulk of possession, without forcing Pope into a save, with full-back Oleksandr Zinchenko summing up his team’s lack of imagination with a couple of long-range shots that cleared the bar.

Ashley Westwood was fortunate to concede a free-kick, rather than penalty, after 15 minutes when he clumsily pushed Aguero in the back but Gundogan drove that dead ball into the Burnley wall.

Nor was there much immediate improvement from City after the restart, with full-back Danilo’s frustrations evident when he collected a yellow card for a crude challenge on Barnes.

Burnley still looked threatening on the break,with Vokes and Gudmundsson combining well to set up goalscorer Barnes for another shot which he sent rising over the cross-bar.

However, the game changed dramatically within the space of three minutes with the Aguero goals and Sane should have scored his team’s third soon after, shooting over an open goal from six yards after Pope had blocked a Danilo shot.

After Sane had made amends, by claiming his team’s third, Aguero might have had a hat-trick but failed to control a near-post ball before City’s matchwinner made way for Bernardo Silva with 10minutes left.