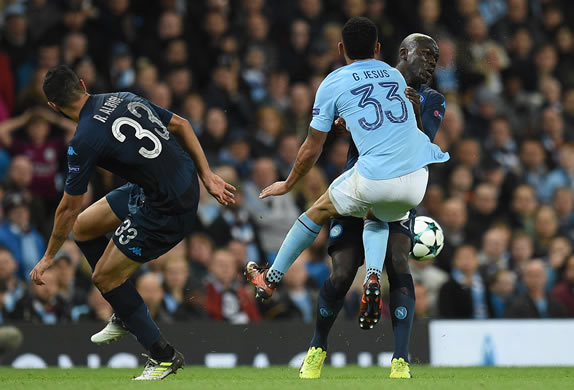 Manchester City striker Gabriel Jesus could be facing up to three months on the sidelines after the club revealed he had suffered a knee ligament injury in Sunday’s draw with Crystal Palace.

The 20-year-old Brazilian – who sat out two months of last season with a metatarsal injury – will undergo a scan to ascertain the severity of the ligament damage.

Jesus, who went off in tears early in the first half of the 0-0 draw with Palace that brought City’s Premier League record 18-match winning streak to an end, remained upbeat.

“Today (Monday) I went through an image exam on my left knee that diagnosed a small medial collateral ligament injury,” he wrote on his Instagram account.

“Thank God it is not very bad and I won’t have to go through any surgery. Promise to be back as soon as possible!”

The injury to Jesus and a less serious one to Belgian star Kevin De Bruyne prompted Manchester City manager Pep Guardiola to criticise the crammed match schedule over the festive period.

“If you tell me that technically, physically it’s good for the players: no, it’s a disaster,” said Guardiola, who had the luxury of winter breaks in both Germany and Spain when he coached Bayern Munich and Barcelona respectively.

City play their fourth match in 11 days later Tuesday at home to Watford.

However, the Spaniard, whose side hold a 12-point lead over Manchester United ahead of the Watford clash, conceded that despite his criticism it wouldn’t make any difference to the scheduling.

“It’s a tradition. I have to adapt,” said the 46-year-old.“Sometimes you have three days’ recovery, sometimes four, sometimes two, everybody is the same.

“Last season we had less recovery than this season, maybe next season we will have a little more.

“It is what it is. This kind of thing I can give my opinion, but do you believe I am going to (get the authorities to) change something? No way.”