Home/News
29, Dec 2017 2 Comments 68880 Views
The Group Managing Director of the Nigerian National Petroleum Corporation (NNPC), Maikanti Baru, has vowed that Nigerians will not go into 2018 with the scarcity of petroleum products.

Baru, who disclosed this to State House correspondents in Abuja on Friday, reiterated NNPC’s position to ensure the pump price of fuel was maintained at the current official price of N145 per litre. 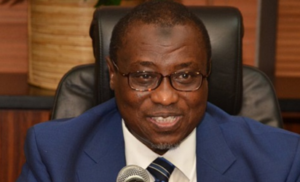 According to him, any marketer found hoarding fuel or selling above the official price will be punished.

“I’m happy to report that we have tamed the monster that reared its head as a result of the rumoured price increase about three weeks ago.

“Unfortunately, that rumour instigated a lot of marketers to be very greedy and they decided that their fellow citizens should not enjoy the Christmas holiday and New Year with ease and decided to profiteer starting by hoarding and diversion of products.

“At the beginning I did address the press, telling the world that we have sufficient products that will last us 30 days through the New Year into January but because the marketers wanted to inflict harm and pains on fellow citizens, they decided to hoard products, divert them and in some cases even smuggled products out of the country.

“This has been tamed by the actions we took and I personally led the war around Abuja and other teams led the war in Lagos and other parts of the country,’’ he said.

The GMD noted that already the queues in the filling stations in Abuja had started disappearing, saying that normalcy would soon be restored in the distribution of the product.

He said: “”As of this morning, I have gone round the Abuja metropolis and I have seen that the queues have reduced significantly to almost normal level and few motorists that I heard speaking on morning programmes concerning what I have seen said they have not spent up to 30 minutes to fuel their cars.

“So the monster has been tamed in Lagos, the situation has been brought into normalcy as far as two days ago and we are also achieving the same thing in all other cities.

“I promised that we have sufficient products that will last us for the next 30 days and we keep bringing in 50 per cent over and above our normal consumption into the country.

“And vessels have been lined up, at the moment I have eight vessels discharging products at various ports around the country.

“So Nigerians should enjoy the New Year and that Mr. President’s directive and guidance which has been very helpful has been executed and normalcy has returned.’’

According to him, the NNPC filling stations are selling the product at N143 per litre.

He warned that any marketer caught selling above the official price of N145 per litre would be sanctioned appropriately by the regulator, DPR and PPPRA with the support of law enforcement agencies.

He said the Nigerian Security and Civil Defense Corps (NSCDC), would make sure that the products were confiscated and given free to the public.

“This is the directive that we are working on by Mr. President and is being executed to the later. Bring them out and sell these products, we don’t have any shortage and we are making massive loadings.

“Normally we should be able to have 850 trucks to satisfy the National consumption but as at yesterday (Dec. 28) we loaded 1,750 trucks to go around the country.

“So we will continue massive load out until we reach the former position whereby all the stations will have products and truck siding,’’ he added.