Home/News
23, Dec 2017 1 Comments 66707 Views
Following the public outcry against the activities of some members of the Special Anti-Robbery Squad of the Nigeria Police force, the IGP has finally acted. 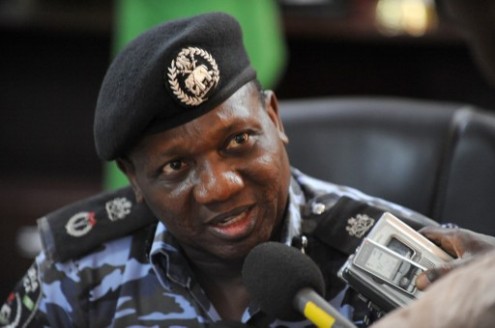 The Inspector-General of Police, Ibrahim Idris, has barred operatives of the Special Anti-Robbery Squad, from providing security protection for Very Important Persons.

While speaking during a meeting with SARS commanders at the Force Headquarters, Abuja on Friday, Idris said the Nigeria Police Force, under his leadership, was worried by the clamour by some Nigerians that the unit should be scrapped.

He also ordered them to stop conducting ‘stop-and-search on roads, getting involved in civil matters, land disputes, personal disputes, debt collection and other civil issues."

They are henceforth to wear official uniforms with clear identifications.

Any operation conducted by the operatives, according to the police boss, must be in a “non-discriminatory, proportional, fair and accountable manner.”

Read the full Press release below:

AN ADDRESS BY THE INSPECTOR GENERAL OF POLICE, IGP IBRAHIM K. IDRIS, NPM, mni, DURING THE IGP’s LECTURE WITH COMMANDERS OF FEDERAL SPECIAL ANTI-ROBBERY SQUAD (FSARS) AT THE FORCE HEADQUARTERS, ABUJA ON FRIDAY, 22nd DECEMBER, 2017.

I bring you warm compliments from the entire Police family and take this opportunity to express my deep gratitude to the Nigeria populace who has over the years enlisted selfless support towards our numerous crime fighting models aimed at advancing the security of lives and properties of all and sundry across the nation.

2. Lately, the attention of the Nigeria Police Force had been drawn to the sentiments by a segment of the society clamouring for the disbandment or otherwise of the Special Anti Robbery Squad (SARS) hash tag “#EndSARS Now”.

3. The Nigeria Police Force and its Management being a responsible and a responsive institution has monitored various concerns generated by this concerns and counter-agitation and painstakingly appropriated this valuable inputs from the Nigeria populace in line with our democratic Policing tenets and commence restructuring measures geared at accommodating the diverse interest of the vast Nigeria populace.

4. In keeping with the foregoing, permit that I refresh our memories of the evolutionary exigencies that birthed the SARS as constituted.

5. It is indeed trite to note that the Special Anti-Robbery Squad of the Nigeria Police is child of circumstance occasioned by the devious activities of the men of the underworld in the hare-days of the Anini/Osumbo era of darkness. Its initial conception was in 1991 when violent crimes became not only alarming but a major source of trepidation for Nigerians. This fears resulted in several deaths and loss of properties worth millions of naira either stolen or destroyed by men of the under-world. The SARS initiative at that point was swift response to imminent loss of confidence from members of the public on the ability of the Police to protect lives and properties. Pursuant the foregoing, the creation of SARS became most expedient to effectively arrest the ugly trend that was fast eroding public confidence and the numerous result of this model has remained indelible in the minds of numerous Nigerians till date.

6. Indeed, there is no doubt that the efforts of SARS Operatives has brought hope and succour as demonstrated by numerous members of the public as it bothers on the activities of various Armed Robbery/Violent crimes gangs. It has become quit imperative to bring it to depth with ever evolving dynamics of modern security needs of the populace in keeping with the tenets of democratic policing.

7. Consequently, the Nigeria Police Force in it proactive demonstration of its sensitivities to the yearnings and demands of modern Policing has embraced the underlisted measures to stem the remote concerns generated by perceived inadequacies of the SARS Operatives;

a. The designation of the Deputy Inspector-General of Police (DIG) Operations to lead SARS as the Strategic Commander.

b. The appointment of a Commissioner of Police as a field Commander of all activities related to SARS. Thus all SARS Operations are answerable to the DIG Operations through the CP FSARS and Commissioners of Police of the Commands.

d. Psychometric test, training and continuous assessment of operatives deployed to SARS to determine the suitability or otherwise of their role in keeping with acceptable standard operating procedure.

f. Prohibition from conducting stop and search on roads unless when necessary.

g. Prohibition of SARS Operatives to act as body-guards, delving into land matters, personal disputes, debt collection and matters that are considered civil.

h. Embark on operations only on the permission of the CP SARS and/or DCs/ACs Operations in the Commands they are answerable to.

i. Operate in official uniform clearly marked for identification.

j. Operations to be conducted in a non-discriminatory, proportionary, fair and accountable manner.

8. In view of the foregoing, the Nigeria Police Force under my leadership shall operate strictly guided by the human rights principles as enshrined under the United Nations Charter on human rights and other extant laws.

9. In demonstration of good faith to the aspiration of the Nigeria populace, I have given mandate to the IGP’s Monitoring Units and ‘X’ Squad and other oversight units of the Force to monitor the activities of the SARS Operatives, while in the same vein, citizens are encouraged to avail the Police ways to improve SARS Operations, across the nation.

Once again, thank you most sincerely, for your partnership and support to the Nigeria Police Force.