Be it evening cocktail party or the first day at a law firm, oxford shoes can make you look dapper all the way. These shoes emanate a classic semblance and can definitely help you put your best foot forward in all formal conventions. Today we are going to browse through an assortment of oxford’s shoes and also share some stylist ratified tips of nailing the right look with it. The oxford name was gained more popularity in Oxford University after 1800. However it was first invented in Scotland, it gained popularity worldwide with British people. You won’t believe that men’s formal shoes global market is worth 9 billion, and oxford shoes is having a share of 25% of the whole market.

In the beginning oxford shoes was plain and simple leather made formal that was worn by students and professors of Oxford University. But since the last 200 years, it gained the popularity that it is now manufactured with lots of variety in various regions. It is more particular in dress shoes or formal shoes. Click here to see more such shoes including oxford shoes variety. 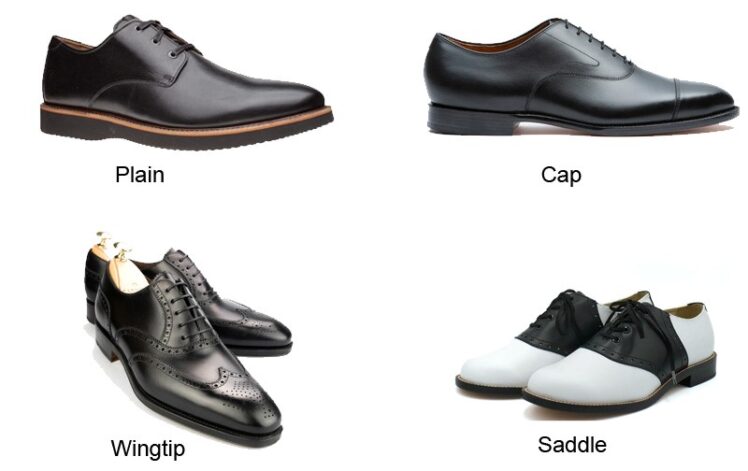 This can surely be touted as the most elegant and formal version of oxford shoes making it a go-to choice for attending black tie events. Its USP lies in being devoid of any detailing and this renders it a sleek profile for extending the appearance of the trousers. It is suitable for office, business meeting, corporate deals and such.

This style derives its name from its unique production technique wherein an additional leather piece is stitched over the toe. While black is the most popular shade of cap toe oxfords, you can also opt for the ones in cognac, brown, oxblood, tan and similar hues. Men can be seen sporting this classic shoe at all business events where power-dressing holds paramount gravity. It is also suitable at offices, business meeting, business travel, trade fair, client meeting, marketing and such events.

They are slightly more informal than the cap toe ones and were part of the brogue family. It can be worn with a Jacket well as, jeans and chinos. The black ones carry a formal flair meant for the office. Dark brown ones however are more versatile and can be styled with tweed fabrics for more casual events and non-white collar environments. The edges of its decorative W or M-shaped toe cap extend along both the sides of the shoe which can be crafted out of suede, leather and nubuck fabrics. It is little stylish compare to plain and cap toe oxford. It is not suitable for a business meeting and such serious events.

There are also four sub  types like a quarter, semi, full and long wind brougue are available for oxford lovers.

The Balmoral design lacks broguing, making it the best choice for being worn to smart events like dressy evening meals or job interviews. They have an extended M-shaped toe cap similar to the wingtip range. The meaning of balmoral varies in Britain and various parts of Europe. Shoes with closed lacing is considered as more formal than open lacing. In Scotland and Ireland region balmoral is named after “Balmoral Castle” owned by Queen Elizabeth II.

These oxford shoes have an incremental strip of leather running from the top to the sole portion in tonal or contrasting shades. They lack any form of toe caps and might or might not have heel caps in contradictory hues. While saddle oxford is historically an American style, presently it is sold all across the globe. This style is endorsed to men owning 15 plus pair of shoes and wishing to add something contemporary to their shoe closet. While the traditional saddle oxfords come in off white or cream shade with red rubber soles and a navy blue saddle, you can also get your hands on a plethora of color choices. They look terrific when styled with colored chinos, jeans, corduroy trousers and other semi-casual or casual outfits. 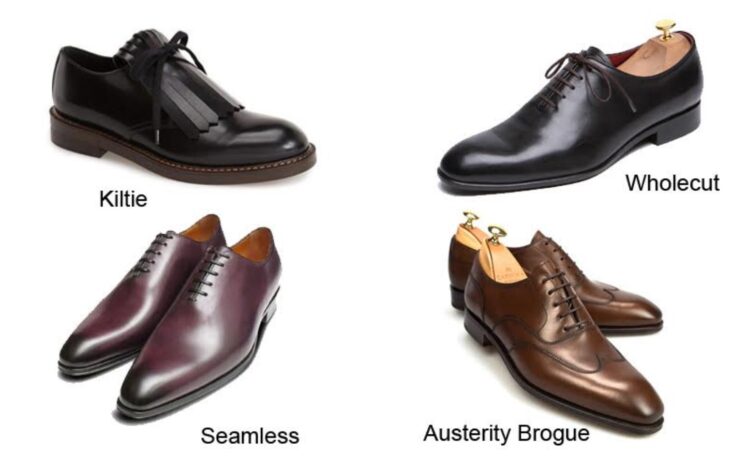 An additional fringed tongue hanging over the top distinguishes a Kiltie oxford from its peer shoes. It will remind you that these shoes were first invented by Scottish people.

The upper portion of this rare bird is cut from a single piece of leather. This along with its distinctive closed lacing system conveys a clean and sleek look to the footwear. A greater quantum of leather goes into its manufacture as it has just one seam at the heel. Wholecut oxford shoes have received a modern makeover in recent times in the form of a medallion on its toe box and broguing. They are costlier than the plain or cap toe oxford variants given the higher leather and skill requirement that goes into its crafting.

The seamless variety is also made from a single piece of leather like the wholecut oxfords. However, they lack any form of seam on the heel and this adds to its manufacturing skill requirements. The leather requirement of seamless oxfords is an exact double of the regular cap toed ones which is why they are sold only by bespoke shoemakers.

They serve as a potent alternative of cap toe oxfords given the clean and minimalistic look. You can wear them with business casual clothing, suits and even a pair of jeans. These shoes were invented during World War II where deficit of leather coerced shoemakers into making wingtip oxfords sans broguing. This helped in saving an additional 1.5cm offset during the austere times of war which led to its unique nomenclature.

Oxford shoes have gained gargantuan popularity over years as the formal footwear for men. They are often confused with derby shoes or brogues. However, the main point of divergence lies in the lack of any adornments like decorative eyelets or perforations in the oxford varieties. The first thought which crosses our mind while reminiscing about oxford shoes is formal events. But modern manufacturers have added a whole new color palette and materials like faux leather, suede, calfskin and even canvas, which have helped oxford shoes in catering to more holistic exigencies.