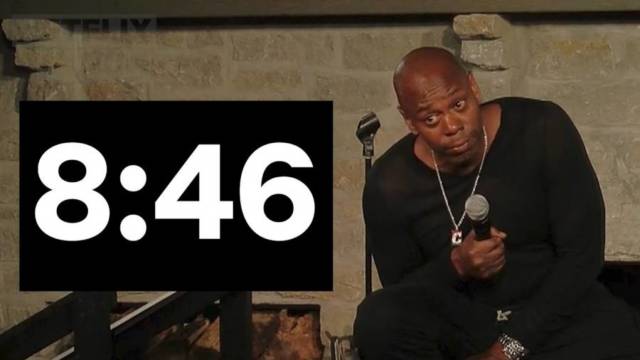 Dave Chappelle just released a new special on YouTube and this guy can do no wrong. It’s not a stand-up special, more a reaction to the George Floyd murder. It’s titled “8:46” for obvious reasons. 8:46 was the amount of time Derek Chauvin had his knee on George Floyd’s neck.

He took the stage in Beavercreek, Ohio in front of a socially distanced audience, masked up of course, for a show he calls “unrefined.”

In it, he starts with the Floyd murder. From there, he touches on black ex-cops and black ex-military members shooting the police, how black people such as Trayvon Martin and Eric Garner keep getting killed and the racist NRA. He tells a story about getting stopped one day and being let off with a warning in his hometown, and the next day, the same officer shooting John Crawford, a black man on his way to buy items to make s’mores with his kids.

At the start, he says about Floyd:

And at the end, he talks about his SNL hosting gig, the one where he mentions how Frederick Douglass was the first black man at the White House, then ties that back to the part about Floyd calling out for his mother with a story about his father.

Any time Chappelle has a special, you have to watch. Don’t expect stand-up. What makes Chappelle great isn’t just that he tells jokes, it’s that he’s a storyteller. Check out his special below.