Many regard Manny Pacquiao as one of the greatest professional boxers of all time, but he is so much more. He is also the current Senator of the Philippines, an actor, and a basketball player. Here you can learn all about his life, careers, and income.

Emmanuel Dapidran Pacquiao was born on December 17, 1978, in Kibawe, Bukidnon, Philippines. His parents, Rosalio and Dionisia, separated when he was a kid after it was revealed that his father had been living with another woman. He has five siblings: Liza, Domingo, Isidra, Alberto, and Rogelio.

Pacquiao finished his elementary education in General Santos City, but due to extreme poverty that his family lived in, he was unable to graduate from high school. He left his family at the age of 14.

Much later in his life, precisely in 2007, he passed a high school equivalency exam, which enables him to finish college. He went on to enroll for a bachelor’s degree in business management in his hometown’s Notre Dame of Dadiangas University.

Even though he had gotten on lousy start as far as his education is concerned, he went on to earn the Honorary Degree of Doctor of Humanities by the Southwestern University.

In 2011, he graduated from the University of Makati with a degree in political science, supporting his career in the House of Representatives.

After realizing that boxing was something he had a talent for, the then fourteen years old Manny, who had no one to rely on except himself, did boxing fights to make sure his mother and siblings had something to eat. Two years of living in the streets of Manila, his amateur boxing career was replaced with a professional one.

His talent was proved once he went on to make history by being the first boxer to win world titles in eight weight divisions.

Year by year, he was rated as the best active boxer in the world by most sports-based websites, including The Ring, Sports Illustrated, About.com, Sporting Life, ESPN, Yahoo! Sports, and others. BoxRec still ranks his as the most significant Asian boxer of all time.

Apart from boxing, Manny also pursued in basketball, as the coach of the Kia Motors Basketball team for the PBA’s 2014-15 season. He later on even played for this team at the point guard position.

In 2018, he switched from Kia Picanto to Senate Defendor in 2018. With them guarding his back, he played in the Charity League, where he scored 14 points in a winning effort for his debut tournament.

He was not very active for the first year of serving in the Philippino Congress; he mostly “kept his head down”. So, when he rather loudly opposed to a National Reproductive Health Bill allowing the government to give out free birth control and mother and child health information to the poor. He noted out that he had made this decision due to his devout Catholic faith. His explanation was found very hypocritical by many since it was known that even his wife used birth control during their marriage.

As he grew up in the Roman Catholic family, which had financial troubles, it’s not very surprising that his political philosophy quotes “for God and the poor”. This course of thinking, however, isn’t something usual within the framework of American politics.

He is a member of the PDP-Laban political party and the People’s Champ Movement.

The couple has five children: Emmanuel Jr., who was nicknamed Jimuel, Michael Stephen, Mary Divine Grace, Queen Elizabeth, and Israel. His oldest son followed in his footsteps and became an amateur boxer.

He is a military reservist in the Reserve Force of the Philippine Army, with the rank of colonel. 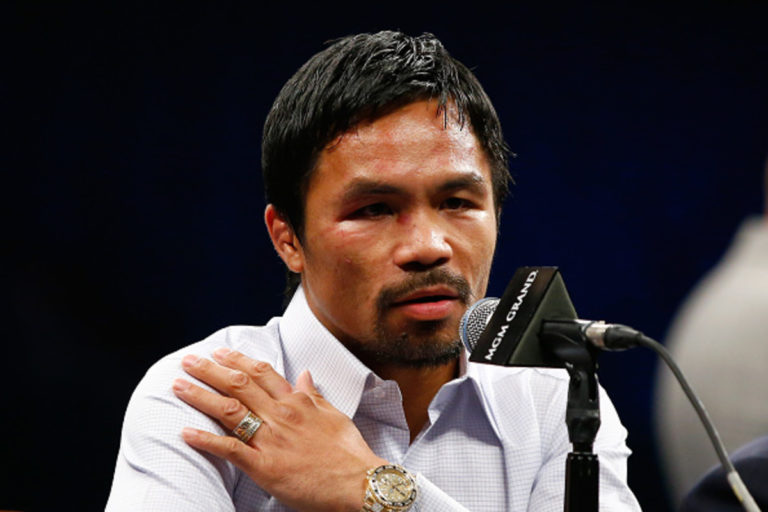 Manny Pacquiao’s net worth in 2020 is estimated to be $200 million. According to Forbes, he is the second-highest-paid athlete as of 2015.