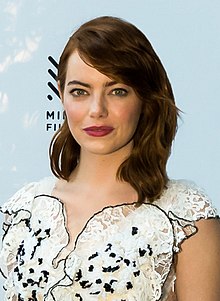 Who Is Emma Stone?

American actress Emma Stone is best known for her witty and charming roles in several popular comedies. She starred in the teen hits Superbad (2007), The House Bunny (2008) and Zombieland (2009), before her Golden Globe-nominated turn as Olive Penderghast in 2010's Easy A. She also had roles in the critically praised The Help and the romantic comedy Crazy, Stupid, Love, both released in 2011, and was cast as Peter Parker's love interest in The Amazing Spider-Man (2012) and its 2014 sequel. Stone received an Oscar nomination for Best Supporting Actress in the dark comedy Birdman (2014) and earned her first Oscar win for her portrayal of an aspiring actress in La La Land (2016). The following year, she garnered more buzz for Battle of the Sexes, in which she played tennis legend Billie Jean King.

Emily Jean "Emma" Stone was born on November 6, 1988, in Scottsdale, Arizona. Her family's surname was anglicized to Stone when her grandfather, who is of Swedish descent, immigrated to the United States through Ellis Island.

Stone began acting when she was 11, with her first stage role in a youth theater production of The Wind in the Willows. Throughout middle school, she appeared in 16 productions with the theater, some of which included The Princess and the Pea, Alice in Wonderland, and Joseph and the Amazing Technicolor Dreamcoat. She also performed with the theater's improvisational comedy troupe.

After attending an all-girl Catholic high school for one semester, Stone dropped out to focus on an acting career. To convince her parents to let her move to Los Angeles, the witty actress put together a PowerPoint presentation aptly titled "Project Hollywood," set to Madonna's song, "Hollywood." Her tactic proved successful, and in January 2004, at the age of 15, Stone moved with her mother to a Los Angeles apartment.

Stone soon began auditioning for roles, often standing out for her signature raspy voice. The fiery young actress was so dedicated that she dyed her childhood blonde locks a dark brown, hoping that the change would help her land more serious roles.

'In Search of the New Partridge Family'

Stone got her first break as the winner of the VH1 reality show In Search of the New Partridge Family in 2004. The reality competition featured eight aspiring young actresses, all competing for the role of Laurie Partridge for a revival of the 1970s sitcom. Contestants were judged on their singing, acting and resemblance to the original Laurie. The young actress, who went by Emily Stone at the time, won over the crowd with a cover of Pat Benatar's "We Belong," and landed the role. Although the project never made it past the pilot, it served as a starting point for Stone's career and led her to future manager Doug Wald.

'Malcolm in the Middle' and 'Drive'

After her run with reality TV, Stone began making appearances on several hit programs, including Malcolm in the Middle and Medium. She soon landed a regular role as 17-year-old Violet Trimble on the drama Drive (2007), which lasted only one season. Around this time, Stone auditioned for a role on the hit science-fiction show Heroes (2006), ultimately losing the part to young actress Hayden Panettiere.

'Superbad' and 'The House Bunny'

In 2007, Stone made her feature film debut in the teen comedy Superbad, alongside Jonah Hill and Michael Cera. The film, which was written and produced by Seth Rogen and Judd Apatow, was a box-office hit and received a strong critical response. A year later, Stone starred in the comedy The Rocker, with Rainn Wilson and Christina Applegate; and The House Bunny, with Anna Faris.

'Zombieland' and 'Easy A'

Over the next few years, Stone emerged onto the Hollywood scene with roles in several big films, including Ghost of Girlfriends Past, Zombieland and Paper Man—both of which were released in 2009. Stone's next big film came in 2010, with the lead role of Olive Penderghast in the teen comedy Easy A. The film, which was inspired by Nathaniel Hawthorne's The Scarlet Letter, surrounds the life of an innocent high school student whose reputation is jeopardized by rumors of promiscuity. Stone's witty and charming performance in the film earned her a Golden Globe nomination for best actress.

Stone received critical praise again in 2011, as college graduate and aspiring writer Eugenia "Skeeter" Phelan in The Help, a film based on Kathryn Stockett's novel of the same name. The film was nominated for both an Oscar and Golden Globe. That same year, Stone starred in the hit romantic comedy Crazy, Stupid, Love, alongside Ryan Gosling and Steve Carell.

In 2016, Stone received her first Golden Globe award for her portrayal of an aspiring actress in the hit movie musical La La Land, co-starring Gosling. The film won seven Golden Globe awards, the most won by any movie in the awards ceremony's history. "This is a film for dreamers, and I think that hope and creativity are two of the most important things in the world and that’s what this movie is about,” Stone said in her acceptance speech. A few months later, with La La Land under consideration for a record-tying 14 Academy Award nominations, Stone took home the coveted award for best actress.

'Battle of the Sexes,' 'The Favourite' and 'Maniac'

Continuing her run of acclaimed work, Stone slipped on her tennis sneakers to portray tennis great Billy Jean King in Battle of the Sexes (2017), about King's 1973 match against former men's champion Bobby Riggs. Stone and Carell, as Riggs, both earned Golden Globe nominations.

The actress went on to co-star in the TV series Maniac. Based on a Norwegian TV show, Maniac featured Stone and Hill as two finalists selected to undergo a pharmaceutical trial, leading to some mind-bending results. She also featured prominently in that year's historical drama The Favourite, for which she nabbed another Academy Award nomination, before returning to a familiar apocalyptic wasteland in 2019's Zombieland: Double Tap.

In her personal life, Stone dated her Spider-Man co-star, Andrew Garfield, for four years. The couple broke up in 2015. Stone has been linked to writer/director Dave McCary since 2017.