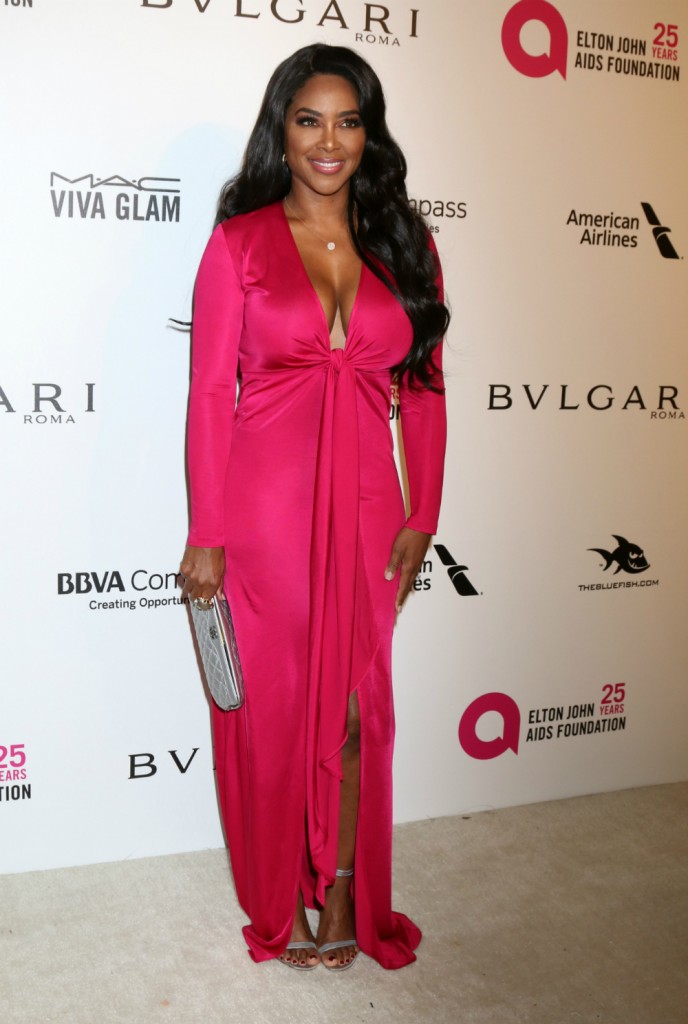 Real Housewives of Atlanta star Kenya Moore is mom to an adorable baby girl named Brooklyn. Kenya got some attention for her pregnancy because 1) babies are exciting and 2) Kenya was 47 when she got pregnant. She made it clear when she married her now-estranged husband, Marc Daly, that they very much wanted babies and had, “definitely been taking the proper steps to try to make that happen.” Since IVF was successful for them, Kenya has partnered with Baby Quest Foundation that offers grants for couples struggling with the cost of IVF. While at their Let’s Make More Babies Fundraiser Gala on Monday, Kenya told Us Weekly that Brooklyn is starting to talk and revealed the first word she spoke, which Kenya claimed was “neighborhood.” Uh-huh.

Kenya Moore’s baby girl is growing up! The 11-month-old, Brooklyn, is already “saying small words,” the Real Housewives of Atlanta alum revealed to Us Weekly exclusively.

“She’s talking now,” the reality star, 48, said at Baby Quest’s “Let’s Make More Babies” Fundraiser Gala on Monday, October 21. “[Her first word] was neighborhood, but no one believes me. I heard it. I swear I heard it. … She doesn’t say neighborhood anymore. It was just a one-time thing when she said it.”

She and her now-estranged husband, Marc Daly, welcomed the little one in November 2018.

“She’s so perfect and strong,” Moore wrote on Instagram at the time. “Marc was incredible in the delivery room. I lost a lot of blood so I’m very weak but they both were strong for me. God is so good. We are blessed and doing well. My heart is so full at the abundance of love for our family!”

I mean, it’s possible, yes. But is it probable? I doubt it. If Brooklyn managed to string together enough sounds to come up with something that sounded like neighborhood, I sincerely doubt that was her intent. When I think of a child’s “first word,” I think it’s an association they made through repetition or mimicry. Like when Gabrielle Union’s daughter Kaavia said “buh-bye” it was at the prompting of her mom repeatedly looking at her and saying “say bye-bye.” I think the fact that it was a one-off confirms that Brooklyn, although I’m sure she’s a lovely and precocious child, was not throwing down “neighborhood” in between bites of mashed peas. Although, Kenya does a lot of sponcon for the Peanut app which claims to put moms in touch with other moms “in your neighborhood,” so maybe she was in front of Brooklyn repeatedly saying, “can you say ‘meet like-minded mamas in your neighborhood?’ Can you? It’ll makes us a boatload of cash for us if you can, Brooklyn.”

Ultimately, I don’t care. If Kenya wants to claim that her daughter’s first word was neighborhood, it gives Brooklyn a great opener for her college application essays. I have no idea what my kids said first, I think it was of the ‘dad’ or ‘flernt’ variety. Honestly, they’ve still barely mastered the language, seemingly only able to say, “but mooo-ooom!”

Besides, look at this child, she’s so precious, she can say whatever she wants. You speak your neighborhood truth, Brooklyn!