Home/News
16, Apr 2019 2 Comments 56990 Views
The leader of the proscribed IPOB group, Nnamdi Kanu has spoken of how Atiku Abubakar can win in court and reclaim his stolen mandate. 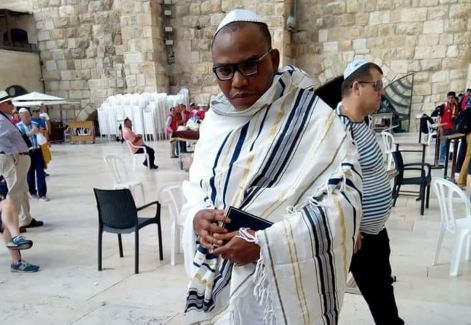 According to him, the only option left for Atiku and the PDP in fighting the ruling All Progressives Congress, APC, at the Election Petition Tribunal is to demand for a DNA test on President Muhammadu Buhari to prove that he is not also Nigerian but a Sudanese body-double identified as Jubril Al-Sudaniy.

He said once Atiku and the PDP play this card on the table, the Aso Rock cabal will have no choice than to return his stolen mandate because the truth will be out as to the true identity of President Buhari.

Recall that the All Progressives Congress, APC, had questioned Atiku’s eligibility to run for president on the premise that he was not Nigerian by birth but Cameroonian.

However, in a live broadcast on Biafra radio yesterday, Kanu said, “I will offer free legal advice to Atiku live on air in the hope that they will use it because it is obvious Atiku won the election and APC are deploying all instruments of coercion at the disposal of the Nigerian state to deny him his mandate. Between Atiku and the man occupying Aso Rock, only Atiku is a Nigerian, the other is Sudanese.

“Buhari died in 2017 and should not be contesting any election in 2019. There was a gentleman’s agreement amongst Fulani cabals of which Atiku is privy to, that the death of Buhari should not be made public lest IPOB take full advantage of it to break Biafra away from Nigeria.

“Atiku played along believing that Jubril and APC won’t put up much resistance when it comes to presidential elections. He was wrong. The cabals have now refused to give up power. Jubril is their poster boy.

“APC is counting on the fact that Atiku won’t fight dirty in public because that means authenticating the claims of IPOB and confirming what world leaders already know, that Buhari is dead. The only people who have refused to believe it are Nigerians.

“The only option left for Atiku is to remind the tribunal that he is an authentic Nigerian citizen whereas Jubril is not. No part of Sudan ever joined Nigeria as a result of referendum, at least not yet. Atiku should demand for a DNA test result to ascertain if Jubril is Buhari or not.

“Out of the two contestants, one is a Nigerian by choice not birth but the other is neither a Nigeria by birth nor by choice.

“Atiku became a Nigerian by referendum at the age of 15 but Jubril in his mid 50’s is not a Nigerian, does not hold Nigerian citizenship and is from Sudan. What Abba Kyari and his gang have done is worse than a military coup. Their role in inflicting hardship on long-suffering people of Nigeria and by extension Biafrans, is unpardonable. They should be tried for high crimes and misdemeanours. They are supposed to be stoned according to Sharia Law.”

Kanu also said another issue which Atiku’s legal team should zero in on is the issue of WAEC certificate.

“Is INEC WAEC? The answer is a capital NO. Only WAEC can respond to the issue of WAEC result not INEC. The examination body is there, still existing. If PDP bigwigs have any brain, they will subpoena WAEC boss to testify under oath. That will send Jubril scurrying back to Khartoum Sudan. But PDP are cowards without the spine to fight a tyrannical impostor. To finish APC is easy but PDP lack the balls.

“Should WAEC boss lie under oath, he or she will be tried for perjury. This is elementary law. Should they forge a result on a paper that has been aged artificially, there is carbon dating technology that will tell us when the paper was made. This is a fool proof process. Buhari before his death had no certificate, Jubril has no certificate and the section 131 (4) of the Nigerian constitution is quite explicit on this, no WAEC certificate no presidency. What is Atiku and his team waiting for?

“The issue of WAEC result can be dealt with now at this tribunal, not in a Nigerian court of law with an APC corrupt judge. If they won’t allow WAEC boss to be called as a witness, get a sworn testimony under oath and Jubril will be a goner.

“Abba Kyari and his cohorts who brought in Jubril to replace Buhari failed to reckon with the fact that no two individuals, even so-called identical twins, are exactly the same in every way.

“It will be very foolish of PDP not to challenge this brazen insult against Atiku by insisting on a DNA test for Jubril. Should Jubril submit himself to a DNA test and confirms he is Buhari, I will drop the agitation for Biafra. That is how certain I am.”