‘Memory: The Origins of Alien’ Review: A Fascinating, Uneven Deep Dive Into the Sci-Fi Classic [Sundance]

Ridley Scott’s 1979 sci-fi film Alien is a classic, plain and simple. It’s one of those movies studied in film school and has been poured over by critics, filmmakers, scholars and fans for decades. But believe it or not, Alexandre O. Philippe‘s new documentary Memory: The Origins of Alien shows there is still plenty to learn about the development and making of such an influential and iconic movie.

Philippe came to Sundance a couple years ago with a documentary called 78/52. That film was an extensive, in-depth examination of the classic shower scene from Alfred Hitchcock’s Psycho. Featuring a cavalcade of cinephiles, ranging from filmmakers to critics with some actors and film professors, the film gave new context to and thorough exploration of one of the most famous scenes of all time. Philippe does that again with Memory, but it’s not quite as entrancing. The presentation is a little uneven and seems to be grasping for straws at times.

In 78/52, Philippe was much more focused, clearly trying to determine through meticulous analysis why the shower scene from Psycho has resonated with audiences for so long. In Memory: The Origins of Alien,  the same task is accomplished with the well-known chestbursting scene, where a character is killed by an alien breaking out from inside his body in front of the entire crew of the Nostromo. But the first half of the film before that acts as an oral history of the early development of the movie, as well as an attempt to trace the film back to its earliest inception from the young experiences of writer Dan O’Bannon, and it’s not nearly as captivating.

Still, there are plenty of compelling details in Memory to satisfy both the hardcore Alien fans and the less knowledgeable moviegoers who still have an affection for the classic film. Part of this is thanks to Dan O’Bannon’s wife Diane O’Bannon, who keeps the spirit of her husband alive by unearthing all the old stories, notes, and drawings he created over the years, especially items that influenced Alien. 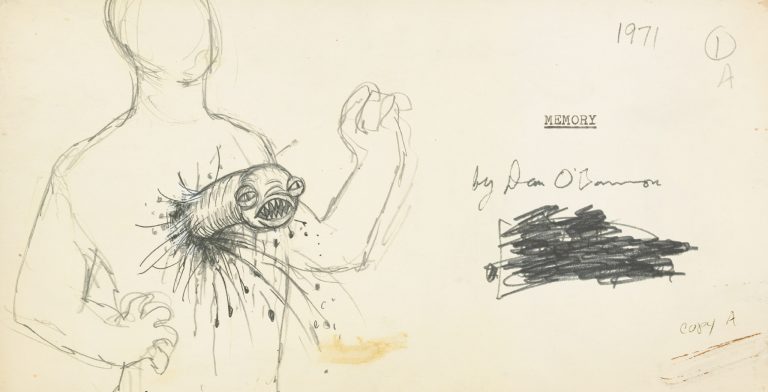 Easily the best part of the documentary comes when Philippe gets back to his 78/52 style and showcases an array of experts pointing out thought-provoking details and interpretations viewers may not have gleaned about the movie. Cast members like Tom Skerritt and Veronica Cartwright offer insight into shooting the chestbursting sequence in particular, and crew members dive into the process of pulling that scene off. Unfortunately, the lack of involvement by Ridley Scott and Sigourney Weaver, not to mention the late Dan O’Bannon and H.R. Giger, leave a number of questions unanswered and something to be desired.

Still, other engaging moments comes from the examinations of art that inspired the most iconic parts of Alien, consciously or not, ranging from the Furies of Greek mythology to the twisted art of Francis Bacon in his painting “Three Studies for Figures at the Base of a Crucifixion” from 1944. But somehow, it never comes together to feel quite as complete or eye-opening as Philippe’s previous work. It’s not for lack of trying though, with plenty of archival material and scholarly discussion to support the director’s grander vision and reveal Alien as more of a Frankenstein creation than previously thought, inspired by various arenas of art and pop culture from several different minds.